One of the most important, and perhaps least understood part of a chimneys components is the flue lining.  A flue lining of a chimney is defined as “A clay, ceramic, or metal conduit installed inside of a chimney, intended to contain the combustion products, direct them to the outside atmosphere, and protect the chimney walls from heat and corrosion.”

Unlined Chimneys – A typical unlined chimney is a brick pillar, i.e. four brick walls. Unlined chimneys allow heat to move through brick chimney walls very quickly.  During performance testing of chimneys, unlined chimneys performed so poorly that testing was abandoned.  If the chimney flue is unlined, the liner can not perform its intended function. Since the early 1980s, fire code has stated that masonry chimneys shall be lined.

Clay Tile Lined Chimneys – The most common material used as a lining for masonry chimneys in new construction is terra-cotta clay flue tile.  It is a relatively inexpensive and easily obtainable product. During performance testing of chimneys, clay flue tiles were easily damaged during the testing of thermal shock.  All of the flue tile samples subjected to the heat shock test suffered damage in the form of cracking. Testing has also shown that clay tile does not crack from normal usage.

Thermal Shock and Liner Damage – Clay tile is a ceramic product and as such it cannot rapidly absorb and evenly distribute heat during rapid temperature rises in the chimney.  A rapid temperature rise (as during a chimney fire) will cause the clay material to rise in temperature much more rapidly on the inside than on the outside of the tile.  As the inside heats up, it will begin to expand very rapidly, much more rapidly than the cooler outside is expanding. This uneven heating produces an unequal expansion which in turn causes the flue tiles to crack and split apart.  This is similar to immersing a cold drinking glass in very hot water.  It will shatter instantly.

Thermal shock results only during periods of rapid temperature rise or fall. These conditions are met almost solely during what is known as a chimney fire, or when water is introduced during a fire, rapidly cooling the tile.

According to fire codes, if the flue liner in a chimney has cracked so that it no longer has the continued ability to contain the products of combustion ( i.e., heat, moisture, creosote and flue gases), it shall be removed and replaced, repaired, or relined with a listed liner system. 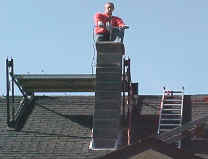 Removing flue tile by banging them into little pieces.

Removing the pieces of flue tile from bottom of chimney. 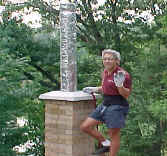 Completed. Mortared up chimney. The lower cap is the cleanout. 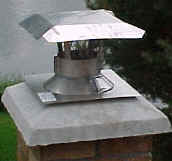